Four and a half short hours after the Cambridge show, my trusty alarm went off at 7 am. I was mostly awake already. Generally when it is imperative that I get up at a certain time I compulsively check my alarm repeatedly between long, anxious dreams about sleeping in. I knew I’d have to drive first, a dreadful thought. First a nerve-wracking drive out of Boston the night before, and now the first shift on our longest drive, 12 hours to the next show in Pittsburgh.

Caleb and Rob’s alarms went off about the same time and they awoke, blinking and bleary eyed. Rees had his own room across the hall. Rees is the first one to get his own room in the pSteps because he snores. And I feel I can say this without fear of his wrath. Because, as he told me, he can’t hear it, it doesn’t bother him, and it usually results in him getting his own room. A win-win for Rees, a slightly more crowded prospect for the rest of us. Julie did not stir, next to me in the bed. I sprang up, grabbed my stuff and headed downstairs for a quick shower.

Whenever there’s an available shower to be had, I’ll take it. I never know when there’s going to be another opportunity out here in the land of indie rock adventure. When I returned to our common sleeping room, Julie was sitting up saying “ooh, I really don’t feel good”. Rob and Caleb were asking her what had happened. As near as we could figure it, the combination of Mexican food and whiskey the night before had not been a good one. Regardless of that, we were in the van half an hour after our alarms went off. And that was impressive, getting five people and all their gear organized so quickly, so early in the morning after so little sleep and one person feeling ill.

Tom-tom was all programmed with our route so all I had to do was follow her calm directions. We stopped for gas and I gave Julie my bottle of Pepto-Bismol. I don’t remember exactly when the barfing started, but it was soon after. Oh lord. Now this I could relate to, this felt familiar. Despair and exhaustion in crazy circumstances. In this case, an endless drive through alien territory with someone quietly vomiting in the back seat, for hours.

It poured rain, there were (of course) thunderstorms, and it was obvious early on that we would have no time to stop for anything. And this was an early show in Pittsburgh. There was a DJ starting at 10 which meant the bands had to be finished by 9:30. And how is it possible that we live in a world where live bands open for DJ’s, I mused. Shouldn’t it be the other way around? Or can I assume that my seven years of post-secondary music study, thirteen years of experience playing in bands professionally, and twenty five years of playing the piano is but a mere acorn next to the almighty oak tree of knowledge and experience that someone with a pair of turntables and a laptop surely must possess? I mean, it must be so tricky to stop and start and combine those samples of music…probably actually creating music out of thin air as a group of people playing musical instruments exactly together is child’ s play in comparison.

Our time for load in came and went. The time for soundcheck came and went. We drove and drove and drove. Tom-tom became confused because we were travelling on roads under construction that hadn’t been updated into its database yet. Tom-tom’s only major failing, too bad we had to discover that right at the moment we were trying with increased desperation to find our venue. After a repeated loop around the outskirts of Pittsburgh (“No no! DON’T LISTEN TO IT! Turn right this time! It doesn’t know what it’s talking about!” Poor Caleb, who was driving. A stressful situation, with Tom-tom insisting one thing while three people were shouting at him in the van to do the opposite, and Julie quietly gagging and retching…he handled it like a champ.) We pulled up to the club 30 minutes before we were supposed to be on. Poor, poor Julie. She had pretty much barfed continuously – in a moving vehicle – for about 12 hours. Into a plastic bag, which she emptied out the window. Oh, it was grim. 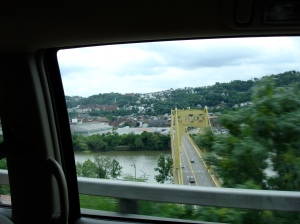 Well, at least they had a green room at The Club Cafe for the bands to use, so we didn’t have to change in the vomitorium, I mean van. We raced upstairs, changed, hair, makeup, and to my amazed delight I saw Julie in fresh clothes calmly putting her hair up and doing her makeup. I think it was at that moment I started to really like her. And I mean, utterly respect her and admire her. I can’t imagine how awful she must have felt at that point. But she didn’t even mention it and it was clear to me that she was going to sing and play the bass that night, no questions asked.

Julie and I walked sedately downstairs into the club and were seated at a table as the opening band played their first note, just as if we had never hurried a day in our lives and everything was completely fine. The Club Cafe was a small room with a tiny stage that had a black curtain backdrop covered with tiny blue lights.

There were lots of people there, every table was full and more standing behind at the bar, which was lit by blue neon the same shade as the stage lights. The Metropolitans, the first band, were so good. Thick soulful horns and a razor-sharp rhythm section. Original songs in funk band format, you don’t see that very much anymore. They had a trombone player with a mohawk and a drummer whose shirt said “Jesus Hates Your Emo Poems”. They were just fantastic, but the crowd didn’t give them much of a reaction.

Then it was our turn. Julie sang and played fine, we all played well, and Caleb broke two strings which I had never seen happen before, not even one string, let alone two in the same show. Whatever. We soldiered on. Caleb managed to change his strings and tune his guitar while singing. Goodness. These Parlour Steps are made of bold stuff indeed. The crowd didn’t seem too impressed with us either, but at least nobody left while we were playing. But lots of people talked to me afterwards, and a couple of people bought me a drink. So maybe that’s how they express their musical appreciation in Pittsburgh. Not a lot of unseemly emotional display, just some quiet compliments and free booze. I can live with that.

Following us was a band called Love Tara. Singer and guitar player Jeff was the wonderful man who would be our host in Pittsburgh. We would be crashing at his house along with his two dogs and eight-and-a-half-months pregnant wife Rachel. After Love Tara was done Jeff took me, Rob, Rees, and Caleb to a bar right around the corner called Jack’s. A working class bar on the fairly tough south side of Pittsburgh. They played pool. We drank $2.00 beers. I looked around and marveled at my life. How did I get here, hanging out with a bunch of tough looking guys and gals shooting pool, smoking, drinking beer, unwinding after a long day…on the south side of Pittsburgh, for pete’s sake. I could never have imagined this, and without Jeff and the other guys I would never have gone into a place like this by myself to people-watch. Oh, baby Jesus! as Julie would say, who was waiting for us in the van. And for that reason we didn’t stay too long. By 11:00 we were all back in the van and on our way to Jeff’s house. Julie and I had our own room, and the next day we would be going to The Andy Warhol Museum (Shane from the Metropolitans hooked us up with free tickets). Pittsburgh was looking good so far.