It was a five hour drive from Pittsburgh to Detroit. We traversed Ohio, and I finally got a chance to see some real prairie. Prairies are my favorite landscape. During my first tour across Canada, I was struck dumb by the awesome beauty of Saskatchewan and Manitoba. And every tour since that first one I look forward to seeing the plains. Driving across Ohio gave me my first pang of homesickness. It reminded me of driving across Canada.

At some point in the early afternoon we all heard the drum kit shift on the roof. Thank god we weren’t all plugged in to our iPods. Rob pulled over, across three lanes of traffic on the freeway, just as a wide spot on the road appeared. And just in time. The drums were still on the roof, but had shifted noticeably. No problem, Coll Audio of Toronto. Your rental drum kit is just fine. Covered in dead bugs, but intact.

Rob and Rees re-secured the drum kit and as we were remarking that bungee cords might be useful, Rees found two in the long grass by the highway. Thank you Ohio, for providing free bungee cords to travelers in need. With the drum kit firmly lashed with a length of strong rope and bungee cords we drove on. We reached Detroit around 5pm. There were lots of heavy industry smokestacks on the way into the city. Intricate cloverleaf freeway patterns, lots of concrete, lots of metal.

We found the venue, The Lager House, and loaded in. 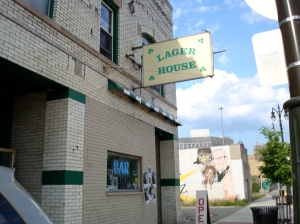 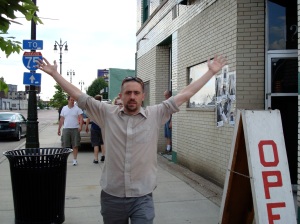 With a few hours to kill before the show, we asked the owner Art where we might find a park to relax. Always a strange request here in the States, it seems. With some surprise he raised his eyebrows and said slowly, “There’s an abandoned railway station a few blocks away with grass and trees in front. Probably going to be some bums there, though”, he added. Abandoned railway station? Really?

Really. According to the signs, we were in Corktown,

the oldest neighborhood in Detroit, settled 1850.

And sure enough, a few blocks down the street there was a massive, enormous abandoned railway station. A majestic building in its time, to be sure. But now covered in graffitti and even the highest up windows were smashed.

We saw a tiny playground nearby attached to a small red brick church. That looked safer, so we went there instead.

The church was beautiful. 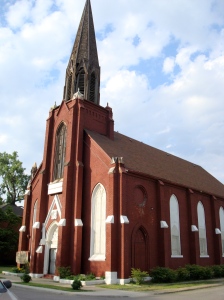 Tall spiky black bell tower, bright red brick, and brilliant emerald lush lawns. Well tended boxes of geraniums were nestled under the windows. I had a lovely swing in the playground, the boys played frisbee and lounged on the grass and Julie talked on the phone to her husband back home.

I grabbed my camera and ventured as close as I dared to take pictures of the train station.

It was a towering gray building with elaborate pillars and broad steps leading up to the wall of many doors (chained shut) that stretched across the front. Surrounding the station – it was set someways back from the street – were formerly landscaped grounds that contained tall trees, a winding footpath, and plenty of green grass. I could see the idea of what that train station used to be. A lot of time had passed since this building was useful and yet there it still sat, reminding us that everything crumbles and passes away, that all things bright and beautiful become tarnished and ugly.

Even though it was Friday afternoon and I could see clearly into downtown – the GM building was clearly visible in the distance – there were very few cars and very few people about. Eventually we decided to drive into the city and find something to eat. There were plenty of cars downtown and we couldn’t find a place to park. But still not very many people. 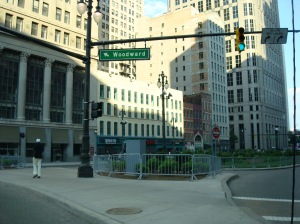 Actually, I don’t know if we were truly ‘downtown’ or not, but I did hear someone on the street say this was the financial district. It certainly looked like a big city. A big, empty city. There were skyscrapers everywhere and some gorgeous architecture. Old brick buildings and newer glass ones. But no throng of rush hour commuters hurrying down the street excited about the weekend.

After dinner (Thai food again, and I’m becoming addicted to hot and sour soup) we headed back to the Lager House to get ready for the show. I talked with Art some more, who was a storehouse of information about the music scene in Detroit past and present. He assured me that the Rock and Roll Hall Of Fame should be in Detroit, not Cleveland. Because no city has contributed more members to the Hall of Fame than Detroit. The White Stripes and Kid Rock had played the Lager House, as had hundreds of other up and coming Detroit bands.

There was still a massive music scene in the city, mostly electric blues and rock and roll. I was thrilled to listen to him and delighted to be in Detroit. The birthplace of Motown! Thousands of great songs have been created and recorded here! One street down from the club was the Rosa Parks Boulevard. There was all kinds of history here, not just music.

The opening band was a very heavy power trio. Easily the loudest band I’ve seen yet on this tour. Then it was our turn. There were a few people there to watch us. The stage was small and I was jammed up against the wall on my right side. We played fine, but I thought it was not the right bill or venue for the Parlour Steps. Too gritty, too tough, too dirty. PStep songs are bouncy and catchy and pretty. This crowd was not bouncy. Or very pretty.

After we played I got talking to a local guy named Clint. He’s a musician too, but wasn’t playing that night. Twenty one years old, born and raised in Detroit. He told me all about how he had been held up at gunpoint at a gas station earlier that day. They took all his money and he said it was probably for the best that he didn’t have his gun with him then, the situation might have gotten out of hand. He explained that Michigan law allows citizens to carry concealed weapons so probably lots of people there at the Lager House tonight had guns. He was going to a big downtown music festival on the weekend, and would make sure to bring his gun because ‘everybody else would bring theirs too’.

In Clint’s opinion, Detroit was not a friendly place. People expected trouble from most human interactions. If a stranger did talk to you, it was probably going to be to rob you, or worse. He noticed that when he traveled outside Detroit, especially to the southern states, people were always asking ‘how y’all doing today?” and that made him nervous, their friendliness, because he kept expecting to be beaten or robbed when anyone spoke to him.

But there was nothing to fear tonight, Clint and Art both assured me. The club was in a ‘pretty good area’. By which they meant there was only property crime around here, we didn’t have to worry about getting shot. Worst case scenario, our van might get ripped off. Oh. What a relief. Craig the sound guy said as long as we:

everything would probably be fine. Okay. Oh yeah, one more thing. Craig, Clint and Art told me that people in Detroit generally treat red lights as 4 way stops after dark. To reduce one’s chances of getting carjacked. Only tourists would wait at a red light after dark. And they get carjacked a lot. Good to know.

Mind-boggling stuff to a small town Canadian girl. I managed to play it cool and not gape in open-mouthed amazement during my conversations with them. I was amazed, though. The level of violence and fear these people live with was completely foreign to me. And the way they have adapted to this, convinced it’s no big deal – that’s pretty amazing too.

The band after us was so awful that I became overwhelmed with weariness and boredom and went out to the van to sleep until it was time to load out. I woke up to help load gear, but passed out again and struggled to keep my eyes open for the border crossing.

Sweet, sweet border crossing. Of course, it was a quick drive there what with not stopping at any of the red lights. And fifteen minutes after we loaded the gear, we were back in Canada. What a knee-loosening, bone-deep relief. Windsor was on the other side of the river from Detroit, but it may as well have been a different planet. The streets were clogged with young drunken partiers. Everyone was laughing and yelling and staggering about, arms around each other. The bars were still open, there were plenty of police out. But even they seemed pretty relaxed, moving calmly through the crowds talking to people. It was an atmosphere of fun and exuberance, completely the opposite of the city we had just left. I fell asleep again, smiling. The next thing I remember is staggering into our hotel room in Windsor. I crawled into bed with Julie and woke up the next morning feeling refreshed and grateful to be back in Canada.