Off to Long and McQuade to rent gear. We assemble a collection of tiny amps, guitars, and a cherry red Nord keyboard for me. Off to Ottawa for art gallery performance, filming, and interview.

Played at The Canteen in Ottawa, a very cool art gallery space. We were in a very small, square room with a low ceiling covered with paintings on 3 sides. I would play excellently a lot more if I was always surrounded by trippy paintings and objet d’art during rock and roll shows.

We were filmed and recorded. There seemed to be a lot of people crammed into the place to hear us play. There was no PA, but Rob played with brushes and Rees and I restrained our awesome rock powers admirably. Caleb’s voice sounded great. Julie and I sang well too. Everyone seemed to really like us, and the filming and recording people were happy.

There was a short group interview where we all were asked about our musical influences. I was delighted to have the chance to warble happily about playing Rockband and my current favorite bands: Queen, Journey, and Blue Oyster Cult. Actually, I’m really loving Weird Al Yankovic right now too, but I felt that might be too much to divulge to the Parlour Steps. Then they wanted two of us to do an interview so I answered a few questions with Caleb. I had been sitting in a van all day, was dressed rather sloppily, had no make-up and my glasses on. Of course there was no time to change beforehand. Ah, the glamour of indie rock.

We loaded our gear and drove 3 blocks to Zaphod Beeblebrox’s for load in and soundcheck. At some point Julie managed to buy a crocheted mustache which she has worn occasionally this week. But not often enough.

The show at Zaphod’s was pretty good. We sold 10 cd’s afterwards! The lead vocal mic became unplugged after sound check so we couldn’t hear Caleb until halfway through As The World Turned Out, the first song. But after that we sounded quite wonderful.

After the show, we stayed with Cara, a lovely woman who loves Parlour Steps. She was a hostest with the mostest. I’ve been very fortunate in my indie rock career to stay at some very nice people’s houses and have slept on all manner of beds, couches, and floors. But Cara really went out of her way to be generous. There were plates of snacks waiting for us, beer, wine, and booze of every description, soft candlelight and warm beds. 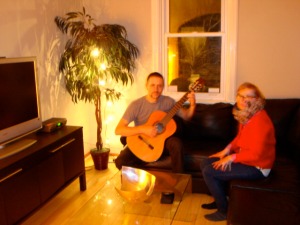 We sang songs by candlelight on Cara’s couch, Rees and Caleb played guitar, Rob played tambourine. After everything Cara provided it seemed fitting to provide her with a private Parlour Steps concert. At 3:00 in the morning a joint was passed around. I’m a lightweight now and can only handle one hit. But that was enough to dance around the kitchen singing ‘The Greatest American Hero (Believe It Or Not)’ with Rees, Julie and Caleb.

I collapsed into bed totally satisfied and amazed at our good fortune. Julie and I had our own rooms and our own beds. The perfect end to a perfect evening.