Is this real life? My first time in New York City will be to play two shows because I’m in a groovy band? I got on a plane in Vancouver this morning and got off in New Jersey. Then we rented a van and drove into New York City. Because Parlour Steps have some showcases to play in Brooklyn, Manhattan, and Boston. And some additional shows to fill in the gaps in Northampton, Mass. and Portland, Maine. It was news to me that there is a Portland in Maine as well as Oregon. If you had told a 16 year old music-crazed geek Alison Maira that she would be playing rock and roll in NYC someday, I would have said, hey. You’ve got the wrong music-crazed geek here. That can’t be me.
But it is! And this trip is made possible by some Nine Mile Records labelmates, a man named Jose Ayerve and his band Spouse. Parlour Steps and Spouse are playing together on a short New England tour. We’ll also be staying with Jose when we play in his hometown of Portland. And he’s is lending his gear for us to play. Yes, that’s right. I don’t even have to worry about lugging around my own keyboards this time around. I haven’t even met Jose yet, but I’m already impressed by his generosity to a group of strangers.
It was a beautiful day for flying.

After a long day of traveling we arrived at the hostel in Brooklyn where we’ll be staying.

Our first show would be the next day, and in the meantime we had some time to walk around and explore the city a little bit. The only really sad part about this trip is that Julie couldn’t come. Luckily we have a lovely replacement bass player, Ryen, who has played with us before. He and I bonded with deeply during a 16 hour drive to a Parlour Steps show at the Starbelly Festival in the East Kootenays last summer. Sometimes you just luck out when you take a road trip with someone new.
So we dropped our stuff in our room and jumped on the subway. A New York subway! I’d only ever seen them in movies on and tv. Off we went to Greenwich Village to meet up with Caleb’s cousin for some drinks.

Oh my. We walked right past the Village Vanguard. Heady stuff for a jazz school graduate. 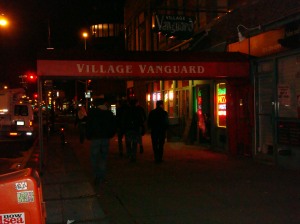 This little corner of Lower Manhattan was quiet and beautiful that night.

I really liked the subway. It was a great setting to take pictures. 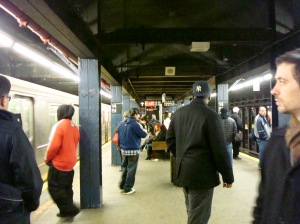 I love the vibe of this city. Especially by night.