Oh. My. Sometimes I am reminded that I’m no longer 22 and not able to abuse my body through too much partying and too little sleep. Let me revise that – I still do occasionally perpetrate such abuse, but I feel a lot worse the morning after than I did in my early 20’s.
Jose is up there for best indie rock host of all time. We arrived at his house at about 3am after the show in Boston. The rest of Spouse was there too. They are just as rad as their playing. There were deep heart to heart conversations, the kind you can only have with strangers that happen to be kindred spirits. Mind you, the conversations were socially lubricated with a steady stream (river?) of drugs and alcohol. Just weed, Ma. Don’t worry, no intravenous adventures for your little girl. Anymore. Just kidding, Ma.
I was the only gal among 12 men. That hasn’t happened for a long time. I forgot that it can be really fun to be one of the guys. I’ve always noticed that as a solitary female in a group of guys, it takes very little time for the guys to forget I’m a girl. Then they really let themselves go and act as men do when their girlfriends aren’t around. Then I have to put up with the relentless teasing and insults that men hurl good naturedly at their friends. Silver lining, I also get to dish out the hurt – to hold my own, it wouldn’t do to have “hurt feelings” – and say things I could never, ever say to my sweet and lovely girlfriends. It can really be quite liberating to visit The Inner World Of Men.
After 2 hours of sleep, it was very very unpleasant to have to wake up at 6:45am to get ready to do another live radio performance at 8am. Ah, the glamour of indie rock. It was freezing cold and there was deep snow everywhere as we loaded up Jose’s van and headed to the station. He had gotten up even earlier than us and made us breakfast. Aw. 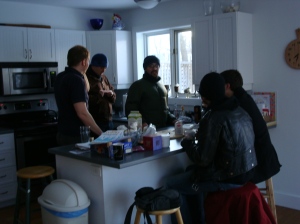 The sunrise and the still, cold, beautiful morning was worth getting up for.

That was the earliest I’ve ever had to perform. It was pretty weird to be drinking my morning coffee while singing and playing keyboard in front of people, but overall it was a very good show. Although I was having trouble remembering the names of the songs at that point.

Later that night we played at a great club called Empire Dine and Dance with Spouse. As usual we got there early and had plenty of time to amuse ourselves before another show with Spouse. 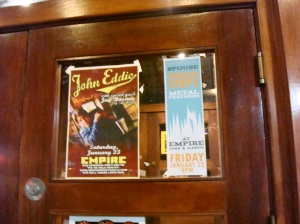 There was a green room for the band that had its own bar.

I think Ryen would make a great bartender.

It was another very cold, very pretty night in Maine. 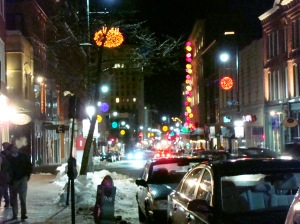 Our show was really good. Considering we’d never played in Portland before and were completely unknown, the crowd was awesome and nicely enthusiastic.

I had my camera on my keyboard amp to record this, so there’s way too much of my keyboards and vocals. Other than that, it’s not bad.