Sat. Mar. 20
Our last of 4 days in Austin. I was feeling significantly better, but still sounded awful with a frighteningly thick, deep cough that I’m sure cost poor Julie several hours of sleep in our shared room as I coughed myself to sleep every night.

It was very cold and windy, probably 15 degrees cooler than it had been all week. We arrived perfectly on time at the venue for load in and sound check. 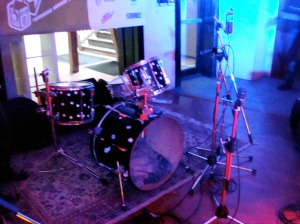 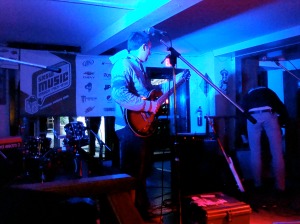 Mobs of shivering hipsters were everywhere, stamping their sneaker clad feet trying to stay warm. Note to self: skinny jeans and thin, vintage t-shirts are not the best body warming options. Very, very cold and raw outside. I was so glad we were playing an indoor show, unlike many unfortunate bands and fans huddled miserably outside, around stacks of marshall amps and drumkits, determined to rock.

The sound guy was from Edmonton, and he was so happy to talk to some fellow Canadians about the recent Olympic hockey triumph. I guess “our game” really does bring us closer together, even thousands of miles from Canadian soil, sigh.

Set up lickety split on a decent sized, well lit stage. After soundcheck there was nothing to do but wait to play, as usual.

It was definitely way too cold and blustery to go exploring outside, so we stayed in and I bonded further (if that is even possible) with Rees and Julie and enjoyed the time we had to talk.

All along we have been so lucky with our shows here. When it was hot and sunny, we played outside where the people were. When it was freezing and dark we played inside where the people were. And we had another prime time slot, 8-9pm, early enough that the crowd was still sort of sober. The room was comfortably full when we started to play and after 2 or 3 songs it was packed.

Definitely our best show in Austin. The band sounded great and everyone played well. The Parlour Steps joy-charm-cuteness-kick ass musicianship tap was flowing freely, as it tends to do on a good night where everything clicks. A wave of people pressed gently, curiously, towards the front of the stage.

I looked out over the growing sea of bobbing heads and smiling faces. Can’t help but smile when I see this, and I mean I can’t stop myself at all. I feel an ecstatic, face-splitting grin creep over my face and it only intensifies as my eyes lock with one stranger after another. They look right back at me and smile even bigger and it’s a very happy feedback loop.

I look to my left and see Caleb and Julie singing and playing so excellently, and Rees playing with the Rees-like skill and intensity that I admire so much. I turn and see Rob behind me, singing along mightily as his arms, hands, legs, and feet bash out the heartbeat of all the songs, the foundation that makes all our textures and layers possible.

I have the best seat in the house for every Parlour Steps show. I remember clearly enjoying PSteps shows as a fan before I joined the band. I was one of the happy upturned faces in the sea of happy faces, jumping somewhat rhythmically in delight as I sang along with my favorite songs. That was fun.

But this is better! Standing in the vortex of a song hurricane, contributing my own melodic noise to this storm, this is bone deep satisfaction. One of my many favorite things about playing music.

Won over the crowd quite intensely, it seems. Photographers running around, snapping pictures of us, a small crush of people with official delegate tags come to talk to me as the last note dies away.

Packed up the gear and walked with it (traffic was so bad it was faster to walk) back to the studio space being used as storage. There were very large blue plastic barrels filled with cans of Red Bull and bottles of vodka, courtesy of illustrious corporate sponsors. Rees liberated several containers, emptied out half a can of Red Bull and filled it back up with vodka for us – not me – I think I’d rather shrivel up with dehydration than drink Red Bull and I’m too much of a lightweight to drink straight vodka. We walked back into downtown Austin for a fabulous meal of Mexican food.

From the restaurant Rees liberated a large plastic water glass so he would have something to pour his vodka into as we strolled the packed, noisy, jubilant, streets of Austin for the last time. 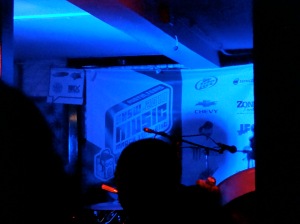 Went to a few bars and saw some good bands. Until about 1:00am, when I saw 3 guys in dark sunglasses and Miami Vice jackets (guitar, guitar, drums) kick into their power pop showcase with sequenced bass, vocal, and keyboard parts.

Bands who play along with computers during a supposedly live show grind my gears SEVERELY. Hello, it’s a live performance. We’re not sitting around in your living room listening to your record. If you can’t play all your parts live, hire more musicians or practice harder.

“WHERE’S YOUR BASS PLAYER?” I shouted belligerently into the moment of silence as the first song ended. Maybe it’s time to go, was my next thought. It would be wrong to embarrass the other Parlour Steps by leaping onstage and unplugging that band’s laptop, thus revealing the emperor was only half dressed.

Moved on to another venue. Julie found the cupcake truck again and tried some more flavors. 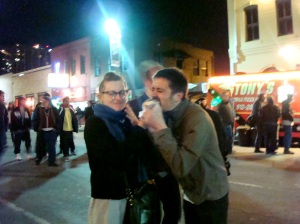 All around us were shivering hipsters. Saw a couple more really good bands who played all their parts live, had a couple of drinks and was further overwhelmed by a glowing contentment. We made our way back to Rick and Rebecca’s and collapsed into bed.