Yeah, Bumbershoot’s a pretty big deal it turns out. Bob Dylan is playing after us (although not on the same stage, honesty compels me to admit). Weezer and Mary J. Blige are here too.

We arrived in Seattle late last night, checked into our hotel and got some good sleep. Today we were ready for our 3:30pm show at the Experience Music Project Skychurch, looking forward to playing after a great rehearsal. Plus we had a chance to incorporate the stuff we learned from Peak Performance camp, so we were definitely better and further along than before. That made me happy. I love getting better at stuff.

We had a bit of time at the Experience Music Project Museum before our show, not nearly enough though. Someday I’m going to come back for 3 days and really do it right. A whole museum devoted to rock, blues, and hip hop with interactive exhibits, you can’t really have a bad time there.

Here’s the view from backstage. It’s a very large space for 5 people to fill.

There were people backstage whose job it was to carry our gear. That was a first. A really great, amazing first. 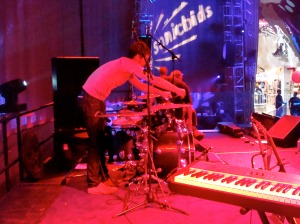 Our show was excellent, probably the best show I’ve ever seen this band play. So many new and different elements onstage (thanks Peak Performance), great musicianship, everyone looked great and had fun. The crowd was awesome Skychurch was filled to capacity, 700+. There was a lineup of 200 more people outside who couldn’t get in. The most successful U.S. show for us ever.

And I feel that I can say that without reservation, because here in this interview that Caleb did for Bumbershoot writer Shawn Conner says “Parlour Steps have broken in America”. Bold, Shawn. Very bold.

Here’s us, playing our little hearts out. Easily the biggest stage and the biggest space we’ve ever played in.

I’ve decided I could definitely get used to being a rock star.