Parlour Steps had the great good fortune to open for Halifax indie band Wintersleep for a couple of their U.S. shows on their most recent tour. We were going to play in Seattle and Portland for the weekend.

Julie, Rob and I drove down together in Julie’s car. We had no problem getting across the border and arrived at the club, The Tractor, in plenty of time. We made checked in with the staff and settled in to wait for Caleb and Rees to show up with the gear. 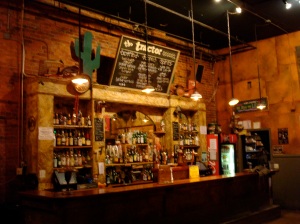 There were a lot of red cowboy boots hanging around. 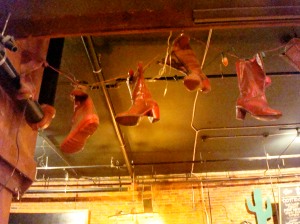 We amused ourselves by taking pictures of each other taking pictures, good natured insults, and talking about Caleb and Rees while they weren’t there to defend themselves. Not really, guys. Well, not very much. 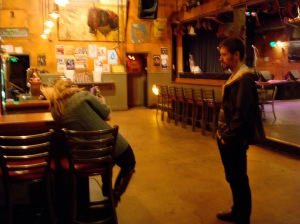 Julie and I went for dinner after all our gear was loaded in and set up. We’ve had lovely dinners all over Canada and the U.S. together, just her and I. I’m not sure how it happens, but frequently we end up eating separately from the boys. Sometimes Rees joins our girl-dinners, which is also fun. He’s a man who knows how to be good friends with women. I’m married to a guy who has that same talent, it’s a wonderful thing.

Tonight it was just the gals though. Rees, Caleb and Rob came to meet later on and we all hung out until it was time for the first band to start. They were a local Seattle band called Land Of Pines. Really nice people and good songs.

and then it was our turn. We had a nicely polished set and it was good and loud onstage. People turned their heads towards the dance floor and gradually pressed closer to the stage. Afterwards we sold cd’s, all to people who’d never heard of us before. And extras as gifts for their friends too. That’s always nice when that happens. A total stranger whose first impression of your band playing live is so good that they buy your album for themselves and their friends on the spot

Wintersleep was such a good way to close the night. They are a very powerful, heavy, melodic rock band. 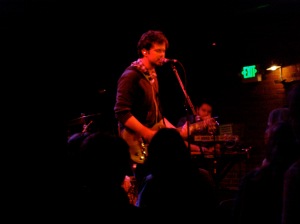 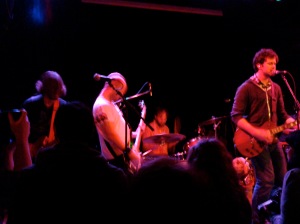 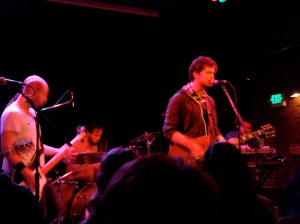 The song they are famous for (Weighty Ghost) is a beautiful, soft ballad. That’s all I knew of Wintersleep before I saw them. As soon as they started their first song, I was immediately impressed by their loud, unified heaviness. Much more prog than I expected, so I was delighted. It’s just fantastic to see a good prog band live. That’s right, I said it. I love prog rock.

Tomorrow, on to Portland.