Rees, Julie and I drove from Seattle to Portland together. I drove part of the way, in Julie’s silver PT Cruiser (his name is Petey). I was secretly pretty stoked to get a chance to drive her car. There’s a teeny tiny little Main Street hipster buried deep inside my stark minimalist exterior. And that little hipster was pleased as punch to throw on her horn rimmed glasses, thrift store tweed blazer and drive Petey proud and fast.

We stopped for gas and when we went in to pay there was a stack of thick magazines called “Are You Prepared For Armageddon?” right next to the cashier.

“How much is this”, I asked.
“Oh, it’s free”, she said. “That guy’s always in here dropping more off”.
Rees and I promptly grabbed copies for ourselves. I was dying to know who “that guy” was, but I didn’t want to draw any more attention to ourselves.

I thought it was going to be tips and recommendations on appropriate preparations for Judgement Day, like earthquake preparedness guidelines. (“When Armageddon comes, take cover under a sturdy table until the rain of fire stops”) But no. It was pretty disappointing. It turns out to prepare for Armageddon you have to read the Bible a lot, and warn people who don’t read the Bible that they are in for a world of hurt come that glorious day when the Prince Of Peace comes to reign over the righteous.

At least Rees and I had plenty to discuss while Julie slept, though. There was a big accident on the highway coming into Portland and we crawled along in the pouring rain for 2 hours before we arrived at Rees’s cousins’ place where we were staying. I first met Joe and Rochelle 2 years ago when Parlour Steps stayed with them in my first tour with them in 2008. Since then they had reproduced and I was looking forward to meeting their 5 month old son.

We played with the baby – Connor was very friendly and smiley – got changed for the show and arrived at the venue, Mississippi Studios, with just enough time to grab some dinner before we had to play. There was a fast and delicious Thai restaurant right across the street.

I think I’ll always think of Parlour Steps when I eat Thai food. It seemed to be the cuisine we could all agree on so we ate a lot of Thai food together over the years, across many provinces and states.

One last change in a bar washroom. Juile lent me one of her “extra shirts”, much cooler than anything I had. Once I again I reap the benefits of her overpacking!

And yes, this was the last time for bar washroom wardrobe changes. It was the last time for everything. This was our last show together. Julie has decided to leave the band to pursue her career (and eventually her own store) as an optician, and Rob is moving to Montreal. Maybe Caleb will continue Parlour Steps in some form, but it won’t ever be with this specific group of people anymore. 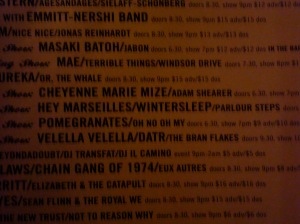 It’s always a little jarring to face big changes, but I’m feeling pretty good about everything. I made some wonderful friends in this band that I’ll stay close with forever. I helped make songs for a really good album, and I had some unique and amazing adventures that would not have been possible without being in Parlour Steps. Who knows what the future holds, and that’s pretty exciting to me.

It was a fantastic show for us. We played very well, the sound was well balanced and comfortable onstage. The room filled up as we played, and Rees had his own cheering section as his Portland relatives screamed in delight for all his guitar solos. A really satisfying bookend to my Parlour Steps experience.

Afterwards we sold some cd’s, and then Julie and I climbed high up onto a catwalk beside the stage to watch Wintersleep again. They packed that place. It was inspiring. After they were done, Julie and I were ready to head back to Joe’s house to crash. But just as we were making our escape, a very tall, polite young man asked Julie if he could borrow her bass, as his had just broken 2 strings. He was in the last band of the night, Hey Marseilles. She of course said yes, and we resigned ourselves to staying put for another couple hours.

And I’m so glad we did! Hey Marseilles were a revelation. They were wonderful, beautiful songs, amazing musicians, great live show. Their keyboard player had a Nord Electro 2 and an accordion. The bass player Sam also played cello. There was a string section, 2 guitars and a great drummer. It’s just so much fun to discover a great band by hearing them play live.

A perfect end to a great night. 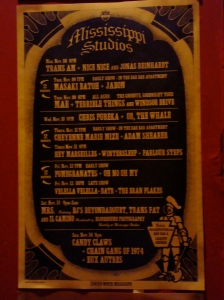 Julie, Rob and I drove back together the next morning. It was a beautiful drive. 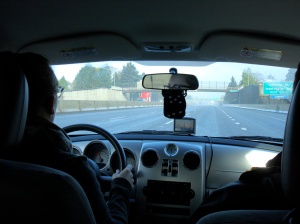 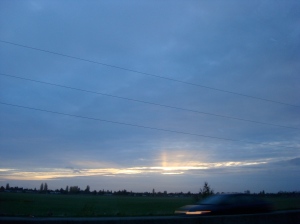 Except for the massive rush hour we hit coming into Vancouver, spending the last 2 hours of the drive crawling through the Massey tunnel. But other than that, a successful weekend.