Another weekend in the studio, and this has been one of my most favorite sessions yet. Dawn and Hilary came in to do all the harmony vocal parts. We’d had a couple of good productive rehearsals in the weeks leading up to recording. They composed and arranged all their parts together and I was really looking forward to capturing it all.

And apparently Mike was looking forward to doing some choral conducting.

I realize that we’ve been making this little album on our own, with no outside help or input. Sometimes that worries me a little. Maybe it’ll be terrible. But maybe there’s something to letting a group of really good musicians come up with their own parts and play them together. That is, after all, how an enormous amount of good music has been created over the past hundred years or so. Good musicians have good ideas, especially about their own instruments.

Hilary and Dawn are great musicians. They were very sensitive to each other and thus blended beautifully into one Super Beautiful Singer when they sang together. Individually they have lovely voices and they made me sound much more awesome (thank goodness) when they sang with me. The parts they wrote made the songs come alive. It was like a thick layer of sparkle and color had been spread over the guitars, organ, piano, bass and drums. And I became wildly inspired to learn how to sing better and decided to re-do all my lead vocals. I’d been considering that for awhile, I knew I’d already learned stuff that would produce a better result. 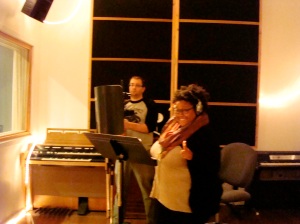 Here’s Dawn recording her part on Every Single One.

We had one gal record in the big room while the other sang along in the control room to help with balance and blend.

This is Hilary singing along, curled up on the couch with her book. Aw.

There’s still some fixes left to do, but now we have a general idea of how the songs are going to sound. I’ve been listening to them and I can honestly say now, there’s very good moments in all of them. I find the more I listen, the less weirded out I am by hearing my own voice. I’ve got a couple of weeks to practice singing in preparation for my re-dos and this time I’ll be enlisting the help of my dear vocalist friends for some coaching. See, so right there I know it’s going to be better than the first try. Yay for growing and learning.