I’ve achieved what can be considered to be a ‘new normal’, although it’s a normal that I would have scoffed at before I became with child. The nausea is still there, but it’s a small, growling beast that cowers in dark corners. Not the overwhelming enormous tireless monster it was two weeks ago. If I eat small bits of food constantly throughout the day and during the night, it mostly lets me be. Go too long without feeding it however and it rears up and reminds me exactly who’s in charge here. But it’s not like the nausea is in charge all by itself. Fatigue is just as determined to boss me around. That too is improving, as long as I go to bed early and sleep late. Sleeping all weekend also seems to help.
What’s really wild about this new normal is that I ignore Nausea and Fatigue at my own tremendous peril. Too busy to listen? Oh well. A little gasping and retching or falling asleep at work in the middle of a conversation should teach me a little lesson. And by then, it’s too late to turn the tide and I’m down for the count for a few hours, enraged at my new powerlessness but simultaneously enthralled at the beautiful efficiency of this system. You will eat and sleep so this tadpole can grow. Your schedule and preferences and completely, utterly irrelevant.
If I am properly fed and rested, I can have a few hours every day when I feel…normal. And that, my friends, is a vast improvement and a blessing to cherish.
I am trying to use these precious windows of calm clarity wisely. I realized that dear Michael’s last year of full time computer science studies at BCIT and my full time teaching practice and growing a human would pretty much eliminate the possibility of either one of us being able to focus on mixing the album.
I decided to hand over the whole thing to Mike Southworth and asked him to mix it for us. Sometimes it’s best to accept your limitations (such as a 9:00 bedtime) and surrender gracefully to a professional.
To my relief, Mike responded positively to my request. Yes, he would be happy to do the mixing, but it would have to wait for a few weeks until he was finished working with Hilary his lovely wife on this years Peak Performance Project, a massive indie rock contest I had participated in the previous year with Parlour Steps. I knew that Hilary and Mike would have their hands full with the contest, and would probably work harder on it than any other contestant past, present, or future. No problem, I said. I can wait. I’m too busy eating and sleeping to much notice a delay anyway.
Maybe I should go out and see some music, I thought. I suspected that playing in bands had destroyed my love of playing music, and I wanted to see if that sour taste in my mouth was from cynicism and frustration, or just the nausea.

Hilary Grist’s Peak Performance Showcase at The Red Room:
I rested up all day for this one and nibbled on cheese and apple slices on the dance floor. It was worth it. 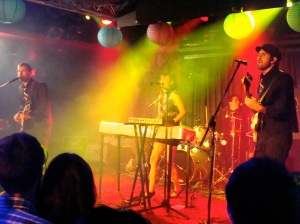 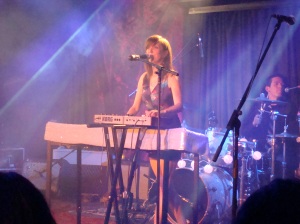 It was the best I’ve ever seen her. Joyful and inspiring. Mike Southworth on drums, Noah Walker on guitar and Matt Rogers on bass round out this stellar band. It’s amazing how many of my fellow Selkirk College Professional Music and Cap College Jazz Studies alumni have ended up dominating the Vancouver indie rock scene.

One of my favorite songs, Tall Buildings, from Hilary’s 2010 album Imaginings. Alas, I just missed the very beginning. A great, exciting performance. Noah’s guitar solo and Mike’s exquisitely sensitive drumming behind it give me tingles.

Dear Michael plays drums in this band, along with his friends Jason Krickler (guitar) and Dan Silk (bass). It’s mostly a side project I think, for all three guys. But with a high level of musicianship and very weird, very good songs.

This is “Two Teeth” a song about drunk guys at a party playing with a bear trap until somebody’s head gets caught. Quirky, funny, and a valid public safety cautionary tale.

Mike drums in this band too, and the lovely Dawn Pemberton sings lead. They do funk, soul, and R&B covers from the 1960’s to present. I always make sure I get out and shake my tail feather to their delicious get down-ness a few times a year. On this particular night they were in fine funky form. It is pretty great to have so many friends that play in great bands and sound awesome.

I was glad to realize that music could still be fun and enjoyable. My friends’ music, anyway. I’ve been playing in bands for 10 years, and it’s mostly been crushing disappointment, frustration, and heartbreak interspersed with moments of the most exquisite joy and satisfaction I will ever experience.
I was very worried I’d be totally adrift after leaving Parlour Steps. But then I started writing songs and recording my EP, and then I got knocked up. And now I’m starting to think there is way more to life than playing somebody else’s songs in somebody else’s band. There is way more to life than playing music. It feels blasphemous to say that after dedicating my life to music, but there it is. There’s fun and friends, babies, becoming a better teacher and writer, going back to school and learning new things. If I hadn’t had a total hiatus from music forced on me by the tyranny of early pregnancy, I wouldn’t have been able to gain a new perspective and become aware of what else was possible for me.
This week I started to feel the baby move. It’s not just me anymore, there’s someone else on this journey with me. And that makes the new normal totally worthwhile.